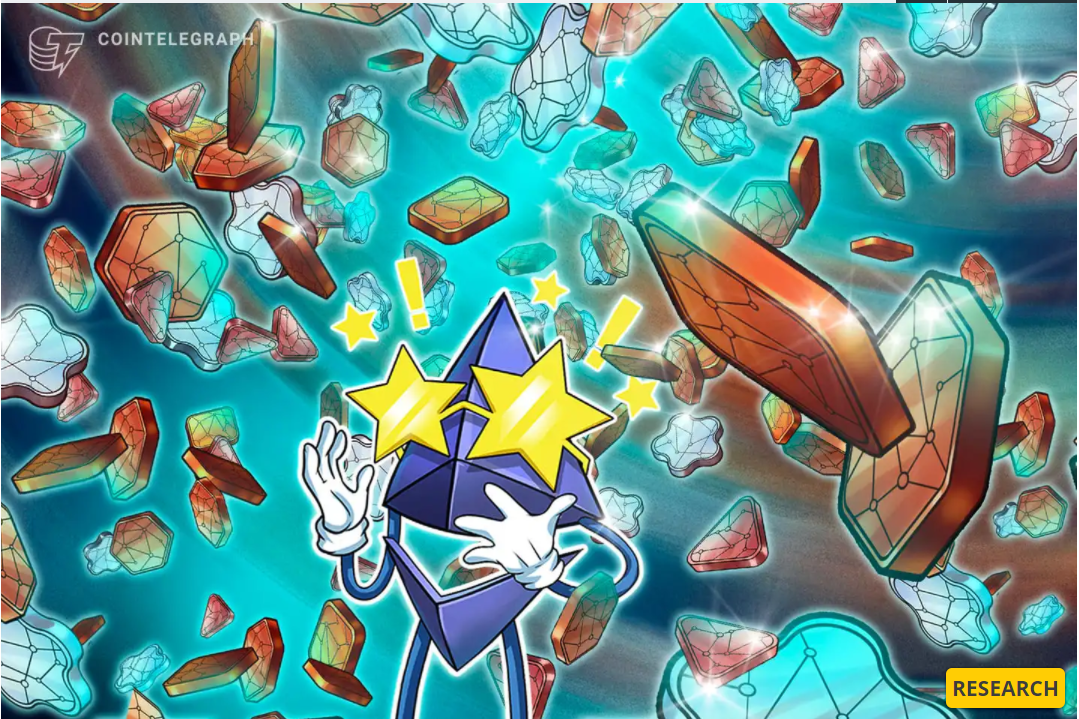 This month, Cointelegraph Research will release a comprehensive report on nonfungible tokens, discussing NFTs in detail and providing a detailed guide to getting into this market.

In collaboration with multiple partners — including Enjin, NFTBank, The Sandbox and others — the report will evaluate the technology behind NFTs, their regulatory challenges, and their prospective growth and current market positions. The report will also outline the hurdles that the market may encounter in the future, and potential ways to overcome them.

At the beginning of 2021, there was increased interest in NFTs, with the largest NFT marketplace, OpenSea, experiencing a hundredfold sales increase in half a year. The total volume of NFT sales reached $2.5 billion in the first half of 2021, almost eight times the total amount in all of 2020.

Being the market leader, OpenSea mainly uses Ethereum, although Polygon and Klaytn are also available. Other marketplaces also allow for the use of alternative blockchains, but Ethereum has dominated the space during the last few months, representing weekly at least 97% of every NFT market sector, including games, collectibles and marketplaces.

However, despite Ethereum’s current superiority, there is a range of significant competitors in the market. As can be seen in the below graph of total NFT sales and traders, the Worldwide Asset eXchange (WAX), Polygon and Flow represent formidable oppositio. Thus far in 2021, every third trader has used Flow and every fourth trader has used WAX, although almost 90% of total sales this year have taken place on Ethereum.

Importantly, the decline in trading volume on Ethereum at the beginning of the year was mainly caused by NBA Top Shot, Dapper Labs’ NFT collectibles project based on the Flow blockchain, which generated approximately $500 million and attracted more than 800,000 users in the first quarter. However, over the longer term, Flow did not succeed in securing a significant market share, despite its lower gas fees (cents vs. tens of dollars) and higher number of transactions per second.

Although WAX only has accounted for around $100 million in sales in 2021 (slightly more than 1%), its website states that it is backed by multiple top-tier companies, including Google, Atari, Funko, Topps, etc.

Considering the sector’s large number of unique traders and the potential to grow through the release of new NFT collectibles and games in partnership with well-known companies, activity on the WAX blockchain may increase in the future. Moreover, the simplicity of NFT transactions on WAX may attract new traders, increasing sales made via the blockchain. However, its peak of activity ($15 million sales per week) occurred in the middle of April. Since then, the blockchain has been processing between $2 million to $3 million in sales weekly, and it is unclear whether those figures will rise soon.

In contrast with Flow and WAX, Polygon has managed to obtain steady, rapid growth over a more extended period, lately generating the majority of its sales through such marketplaces as OpenSea and Aavegotchi's Baazaar. The popularity of Polygon outside of the NFT market, combined with low gas fees ($0.01 to register an NFT on OpenSea vs. $230 with Ethereum), may stimulate NFT market activity on the Polygon blockchain in the long term.

Other notable blockchains — such as Waves (known for the Waves Ducks game), Binance Smart Chain and Tezos (known for Hic Et Nuc, a crypto art NFT platform) — are present in the market yet have accounted for less than 1% of all NFT sales in 2021. There are also other blockchains that are just now entering the space, such as the Devvio blockchain, which focuses on play-to-earn gaming.