摘要： A herd of unicorns is at the stable door, looking to trample Wells Fargo and Chase. 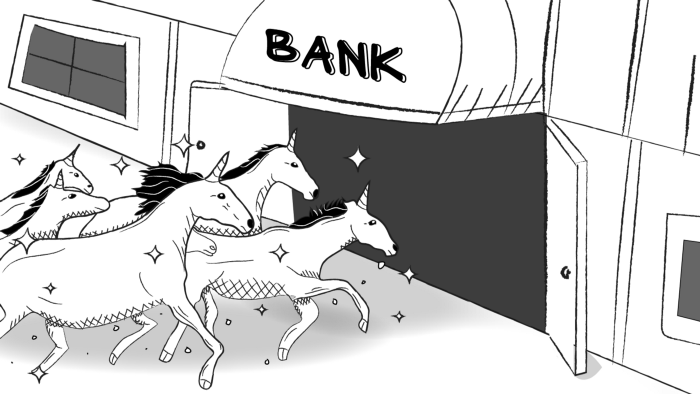 My north star(s) for philosophy, management, and politics are Star Wars, The Sopranos, and Game of Thrones, respectively. The Iron Bank (GoT) is a metaphor for today’s financial institutions, if present-day banks didn’t need bailouts or to invent fake accounts to juice compensation. Regardless, it was well known throughout Braavos that The Iron Bank will have its due. If you failed to repay, they’d fund your enemies. So today’s Iron Bankers are the venture capitalists funding (any) incumbents’ enemies. If this makes VCs sound interesting/cool, don’t trust your instincts.

Lately, I’ve spent a decent amount of time on the phone with my bank in an attempt to get a home equity line, as I want to load up on Dogecoin. (Note: kidding.) (Note: mostly.) If Opendoor and Zillow can use algorithms and Google Maps to get an offer on my house in 24 hours, why does it take my bank — which underwrote the original mortgage — so much longer?

How ripe a sector is for disruption is a function of several factors. One (relatively) easy proxy is the delta between price increases and inflation, and if the innovation in the sector justifies the delta. Think of the $200 cable bill, or a $5.6 million 60-second Super Bowl spot, as canaries in the ad-supported media coal mine.

Another, easier (and more fun) indicator of ripeness is the eighties test. Put yourself smack dab in the center of the store/product/service, close your eyes, spin around three times, open your eyes, and ask if you’d know within 5 seconds that you were not in 1985. Theaters, grocery stores, gas stations, dry cleaners, university classes, doctor’s offices, and banks still feel as if you could run into Ally Sheedy or The Bangles.

It’s hard to imagine an industry more ripe for disruption than the business of money.

Let’s start with this: 25% of U.S. households are either unbanked or underbanked. Half of the nation’s unbanked households say they don’t have enough money to meet the minimum balance requirements. 34% say bank fees are too high. And, if you’re trying to get a mortgage, you’d better hope the house isn’t cheap. 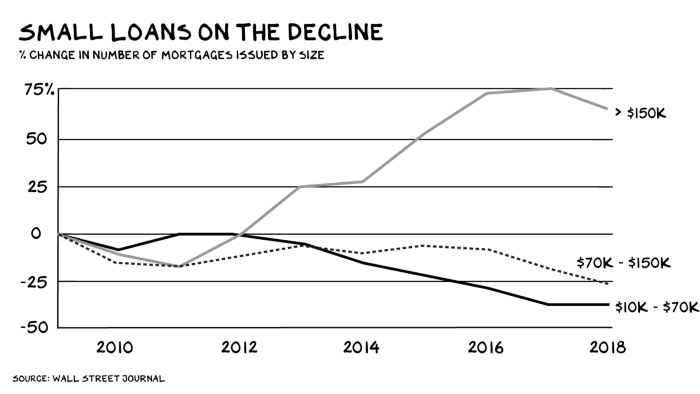 Inequity is a breeding ground for disruption, leaving underserved markets for insurgents to seize and launch an attack on incumbents from below. We have good reason to believe that’s happening in banking.

A herd of unicorns is at the stable door, looking to trample Wells Fargo and Chase. Fintech is responsible for roughly one in five (17%) of the world’s unicorns, more than any other sector. In addition, there are already several megalodons worth more than financial institutions that have spent generations building (mis)trust. 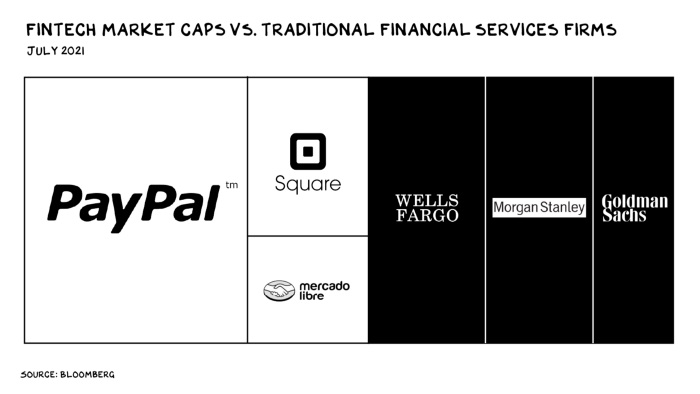 How did this happen? The fintechs are zeroing in on everything big banks aren’t. 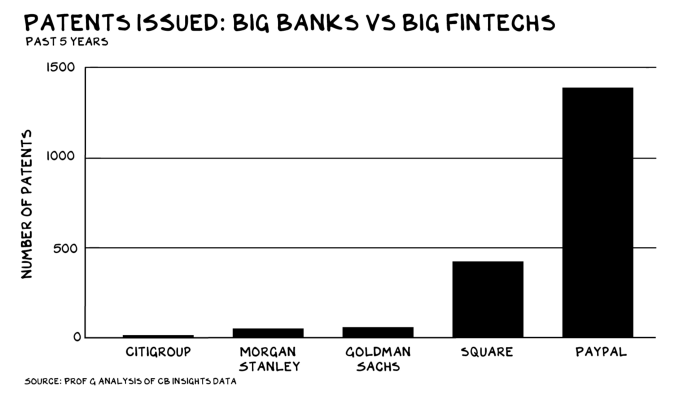 Example #2: Cost-cutting.“Neobanks” offer the basic services of a bank, with one less expensive and cumbersome feature: the branch. A traditional bank branch needs $50 million in deposits to generate an adequate return. Yet nearly half (48%) of branches in the U.S. are below that threshold. Neobanks don’t have that problem, and there are now at least 177 of them. Founders frame these offerings as more progressive, less corporate. Dave, a new banking app, offers a Founding Story on its website (illustrated with cartoon bears) about three friends “fed up” with their banking experience, often incurring $38 overdraft fees. Fed up no longer: Dave provides free overdraft protection and has 10 million customers.

Example #4: Serving the underserved.Unequal access to banking is a global botheration. Almost a third of the world’s adults, 1.7 billion, are unbanked. In Argentina, Colombia, Nigeria, and other countries, more than 50% of adults are unbanked. 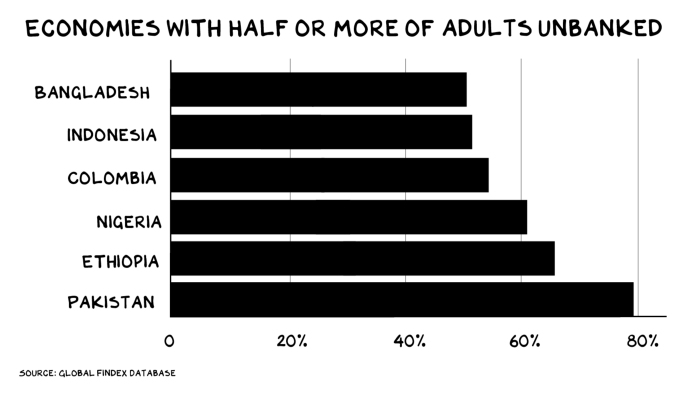 But innovation is already on the horizon: Take Argentine fintech Ualá, whose CEO Pierpaolo Barbieri I spoke with on the Pod last week. In just 4 years, more than 3 million people have opened an account with his company — about 9% of the country — and over 25% of 18 to 25-year-olds now have a tarjeta Ualá (online wallet). Ualá recently launched in Mexico, where, as of 2017, only 2.6% of the poorest 40% had a credit card. This is more than an economic issue — it’s a societal issue, as financial inclusion bolsters the middle class and forms a solid base for democracy.

Chase savings accounts are offering, no joke, 0.01% interest. Wells Fargo? The same, though if you keep your investment portfolio with Wells, they’ll double that rate to 0.02%. Meanwhile, neobanks including Ally and Chime offer 0.5% — 50 times the competition.

There is also blood in the water for fintech unicorns that have created a debit, vs. credit, generation: The buy-now-pay-later fintech Afterpay has more than 5 million U.S. customers — just two years after launching in the country. As of February, its competitor Affirm has 4.5 million customers.

Unicorns are also coming for payments. The megasaurus in this space is PayPal, which has built the first global payments platform outside the credit card model and is second only to Visa in payment volume and revenue. Square’s Cash app is capturing share, and Apple Cash is also a player, as it’s … Apple. 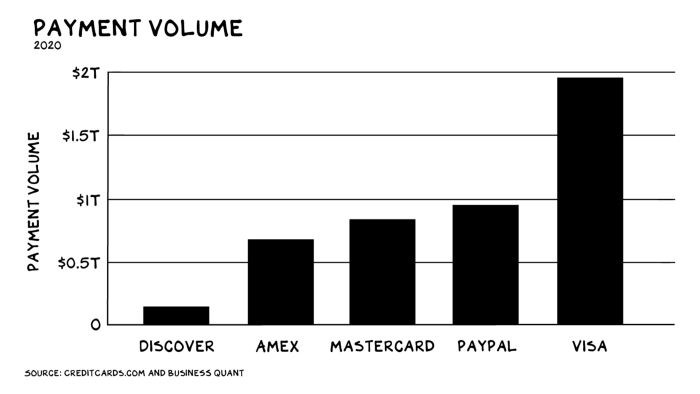 Square, Apple, and a host of other companies are taking the “partnership” approach, bolting new services onto the existing transaction infrastructure. Square’s little white box is a low-upfront-cost way for a small merchant to accept credit cards. It’s particularly interesting that Apple teamed up with Goldman Sachs instead of a traditional bank. Goldman is looking to get into the consumer space (see Marcus), and Apple is looking to get into the payments space — this alliance could be the unsullied fighting with air cover from dragons. It should make Wells and BofA anxious.

The Big Four credit card system operators (Visa, MasterCard, Discover, and American Express) are still the dominant payment players, and they have deep moats. Their brands are global, their networks robust. Visa can handle 76,000 transactions per second in 160 currencies, and as of this week it had settled $1 billion in cryptocurrency transactions.

Still, even the king of payments sees dead people. In 2020, Visa tried to buy Plaid for $5.3 billion. Plaid currently helps connect existing payments providers (i.e. banks) to finance software such as Quicken and Mint. But it plans to expand from that beachhead into offering a full-fledged payments system. Visa CEO Al Kelly initially described the deal as an “insurance policy” to neutralize a “threat to our important U.S. debit business.” In an encouraging sign that American antitrust authorities are stirring, the Department of Justice filed suit to block the merger, and Visa walked.

Fintech is also coming for investing with online trading apps (Robinhood, Webull, Public, and several of the neobanks) and through the crypto side door (Coinbase, Gemini, Binance). Insurance is under threat from companies like Lemonade (home), Ladder (life), and Root (auto).

In sum, fintech is likely as underhyped as space is overhyped. Why? The ROI on your professional efforts and investing are inversely proportional to how sexy the industry/investment is, and fintech is … boring. Except for the immense opportunity and value creation — for multiple stakeholders. “Half the world is unbanked, but we need to colonize Mars,” said no rational investor ever.