摘要： There’s power in numbers, but what if those numbers are actually the crypto currency sentiment from Reddit posts? And what if we built a cryptocurrency trading bot that buys crypto based on the Reddit sentiment of specific coins.

There’s power in numbers, but what if those numbers are actually the crypto currency sentiment from Reddit posts? And what if we built a cryptocurrency trading bot that buys crypto based on the Reddit sentiment of specific coins.

Reddit feels positively about Bitcoin? Let’s buy some. Reddit likes ALGO today — great let’s get some of that as well.

I built an algorithm to do just that, you can see a detailed guide for the reddit sentiment crypto trading bot here, and I have been testing it for a about three weeks now.

Last time I crunched the numbers together was after about a week of running it and I was in profit. Reddit actually made me money. Well technically, it was the market as I just happened to deploy the bot during a mini-bull run 3 weeks ago.

Today it’s time to look at the overall performance, as well as how the bot logic has worked in general.

The parameters I gave my crypto trading bot is to only look for keywords from the top 40 coins by marketcap, in order to stop it from buying into scams or other suspicious projects. Within 3 weeks the bot has invested in half of the top 40 coins.

Looking at some of the coins that weren’t picked up by our bot tends to reveal an interesting conclusion: USDT, BUSD, BNB, USDC, UNI, Crypto.com, SHIBA. Although these are in top 40, Reddit didn’t bother talking about them, or not positively at any rate.

What these coins have in common is that most of them are transactional tokens, stablecoins, or downright useless coins (looking at you SHIBA). As a Redditor myself, I’m quite proud of the result generated by the hivemind, yes DOGE is there but it doesn’t matter. Most coins picked by the trading bot with help of the Reddit sentiment are coins that I would invest into myself.

For now the return on our investment doesn’t look so great. But then again, no accumulation strategy will perform well in a downtrend so this is not representative of the overall result. The outcome is relatively predictable, if the market is up, we’re up as we’re buying the actual asset and not using CFDs or futures trading. 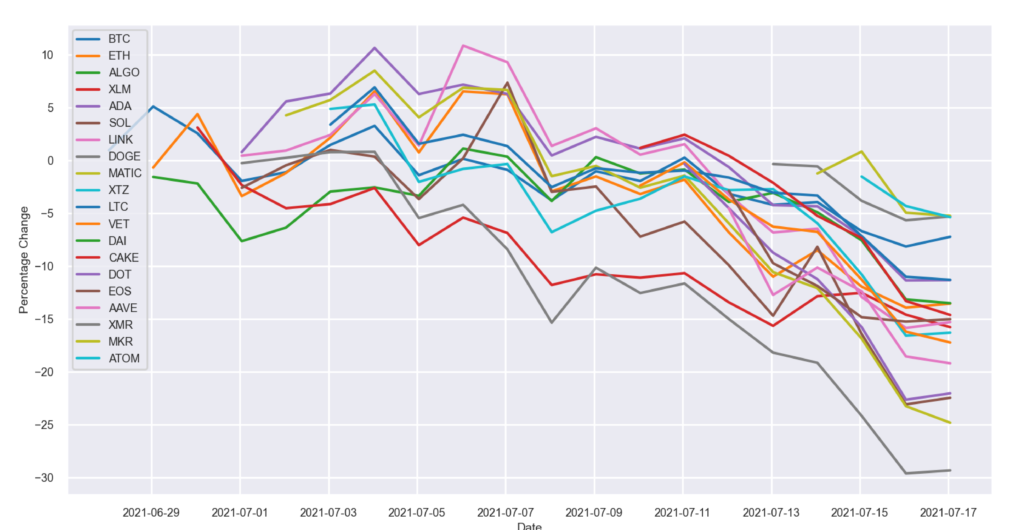 The scatter plot below helps to clear out a bit of the spaghetti that’s going on in the previous chart, for a better look at the daily performance.

Overall I’m on 15% loss, but as the entire market is down, this is not indicative of the performance. The data that does get me excited is the quality of the coins bought, which means that if nothing else, this could be an automated buy and hold diversification strategy. What are your thoughts on it?