摘要： A new stablecoin project says it has solved the problem of how to maintain a level price using market forces rather than huge stacks of fiat or locked crypto. 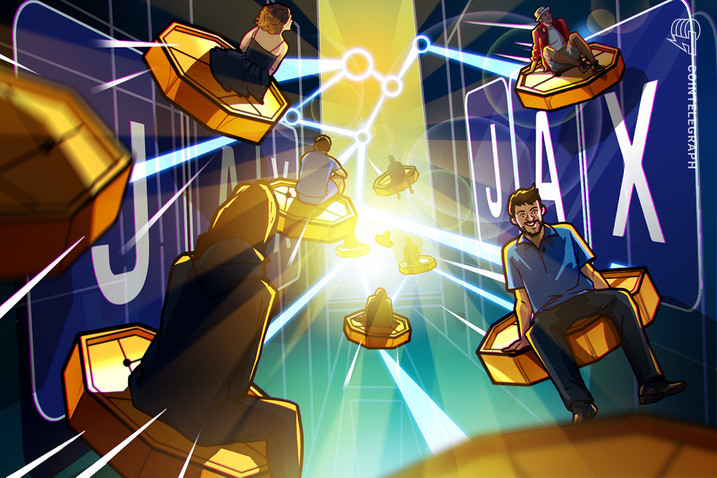 Jax.Network is a sharded proof-of-work blockchain anchored to the Bitcoin network on which two coins are mined: JAX and JAXNET (JXN). JXN is mined on the Jax.Network beacon chain, whereas JAX is mined on its shard chains.

JXN coin mining produces a fixed number of reward coins (20 coins per block), making it a speculative asset that reflects the value of the Jax.Network payments ecosystem. It is used to incentivize Bitcoin miners to merge mine Jax.Network and defend the beacon chain, to pay for gas fees for decentralized exchange agent listings and other transactions, and more broadly to serve as a secondary savings account for Bitcoin miners. In the long term, the company says it will incentivize BTC miners to continue defending the network even if the BTC mining rewards move closer to zero.

JAX is the stablecoin, intended to be used for day-to-day transactions. Its shard chains are created as the miners determine they are needed, enabling the Jax.Network blockchain to scale in a virtually limitless fashion.

JAX relies on merge mining, piggybacking on Bitcoin, to create a highly scalable, market-driven cryptocurrency that incentivizes miners while gaining the security of the largest PoW blockchain. It also avoids the excessive gas fees of Ethereum.

“Stablecoins are central players for the crypto market and yet very inefficient, either because they are pegged to fiat currencies or need too much collateral to become a viable solution,” Jax.Network CEO Vinod Manoharan said. “This situation defeats the purpose of using cryptocurrencies in the first place. We may be a latecomer, but we believe our tech solves these issues.”

Jax.Network is neither pegged to any fiat currency, nor backed by locked cryptocurrency or an algorithm to keep its price stable. Instead, it relies on market forces to produce JAX when needed to keep the price stable. This is done in several ways. First of all, the reward function on the shards is proportional to the total computing power. In this way, the cost of production is based on the hashrate expenses, so miners won’t produce JAX coins when the cost of production is above their value, the company said.

Secondly, in order to produce JAX, miners must burn JXN and BTC block rewards, making it very easy for miners to determine if it is worth printing JAX or not.

Bitcoin was chosen as the anchor PoW cryptocurrency because it is highly secure due to the number of miners, the company said. Beyond that, Jax.Network should provide scalability and stability for Bitcoin, while bypassing the need to provide liquidity for its own coins.

A new model for sustainable mining

One point to note is that when Jax.Network talks of “merge mining” it not only means that you can merge-mine Jax.Network along with Bitcoin, but also that you can mine multiple shards at once for more transaction fees. Among the key reasons for this is to protect the shards from 51% takeover attacks. The company claims that this implementation of merged-mining doesn’t compromise on the decentralization aspect.

“Our shards have a unique reward function, which is proportional to the hash rate of the network.This allows us to peg the shard coins to the cost of one unit of computing power. At the protocol level, we incentivize miners to print this coin (JAX) only when there is a demand for it. Hence, bringing a coin that is stable in value to the Bitcoin network. So miners can choose which coin to mine, either (BTC + JXN) or JAX, which is more profitable due to sustainable revenues,” the company wrote in a Medium post.

The launch of Jax.Network testnet, followed by a token sale and mainnet launch, is scheduled for the third quarter of 2021, while Q4 will be dedicated to market making to grow adoption of the JAX stablecoin.

A new stablecoin project seeks to create a decentralized solution that neither locks up excessive amounts of capital nor relies on an algorithm to keep its value level.