摘要： While Bitcoin’s stock to flow will not reach infinity until 2140, its “effective USD” stock to flow could soon hit infinity. Let’s explore this idea.

Bitcoin has a preprogrammed algorithmic stock to flow ratio. The ratio is calculated by dividing the existing stock of bitcoin by the flow of bitcoin to be mined annually.

This concept was originally made popular by Saifedean Ammous, author of The Bitcoin Standard and later was analyzed quantitatively by PlanB who created the S2F and S2FX price models.

While Bitcoin’s stock to flow will not reach infinity until 2140, its “effective USD” stock to flow could soon hit infinity. Let’s explore this idea.

Both groups historically have supplied consistent sell pressure to the market ensuring coins get more distributed and price doesn’t move too high too fast without a significant correction.

But in 2021, the Bitcoin market has matured to the point where traditional sell pressure from these two sources has already started evaporating at the exact same time buy pressure is exploding.

This idea of an “effective USD” stock to flow ratio is new and could be incorrect or useless, but it does help identify and understand the implications of why bitcoin being forced sold by miners may not occur this cycle.

After previous halvings, there were no large publicly traded miners, and private miners did not have access to cheap financing.

These mining firms are not selling their Bitcoin due to the high availability of capital.

Mining firms could even go one step further by following Michael Saylor’s lead by issuing bonds to purchase more Bitcoin at 0% interest rates.

$MARA is already doing this by both mining AND purchasing additional Bitcoin. 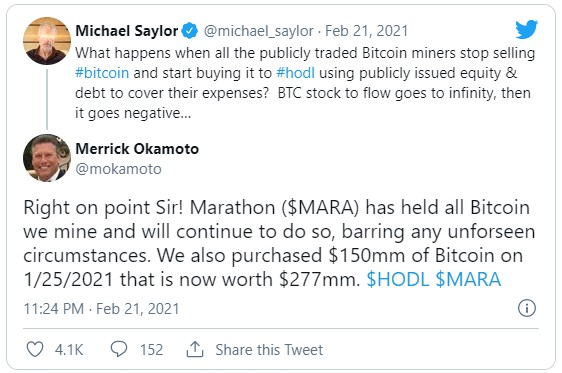 Other private US based mining firms are also not selling any Bitcoin, and they can use Bitcoin as collateral to fund operations if needed. 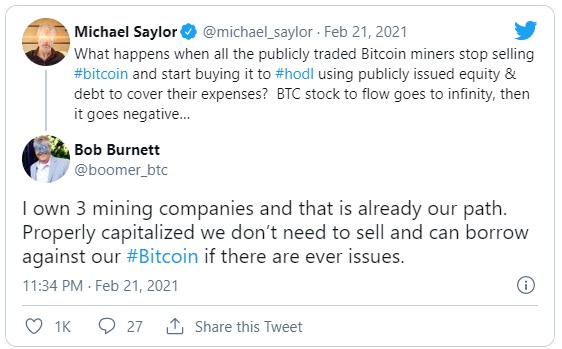 Again this does NOT change Bitcoin’s actual S2F ratio, but it could change Bitcoin’s “effective USD” S2F ratio. What this means is the nominal price of Bitcoin could very well reach infinity (hyperbitcoinization), while the real price may still have room to grow after future halvings.

In addition to miners not selling, there is no longer a need for Bitcoin HODLers to sell their bitcoin no matter how large their stack becomes. New platforms that now have billions in AUM allow Bitcoin savers to generate yield in a low risk manner from their bitcoin. BlockFi, Nexo, Gemini, and HodlHodl are just a few of the platforms enabling you to earn up to 8% annually.

HODLers also have the opportunity to post their Bitcoin as collateral to borrow USD. They can use the funds to invest in other cash flow producing assets like real estate or they can simply live off the borrowed money.

Last, hodlers can generate yield off their Bitcoin themselves by executing the contango cash and carry trade. 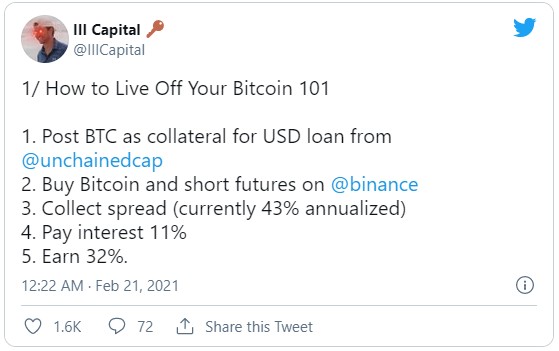 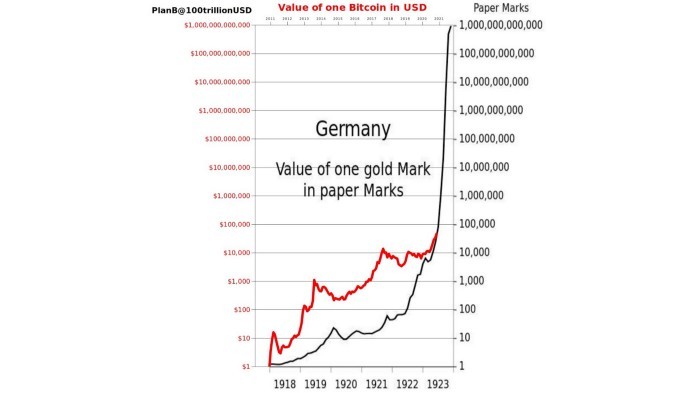 The current macro backdrop of easy fed policy and limitless fiscal spending combined with the decreasing need to sell Bitcoin could make for a very interesting 2021.

The multitude of reasons for Bitcoin sellers to evaporate seems to be growing exponentially. Will this be the very last Bitcoin cycle? Who knows. While Bitcoin is sitting at a $1T market cap, it is still small and has a massive amount of upside remaining. However, the lack of selling and macro backdrop continues to foreshadow that escape velocity is closer to becoming reality.