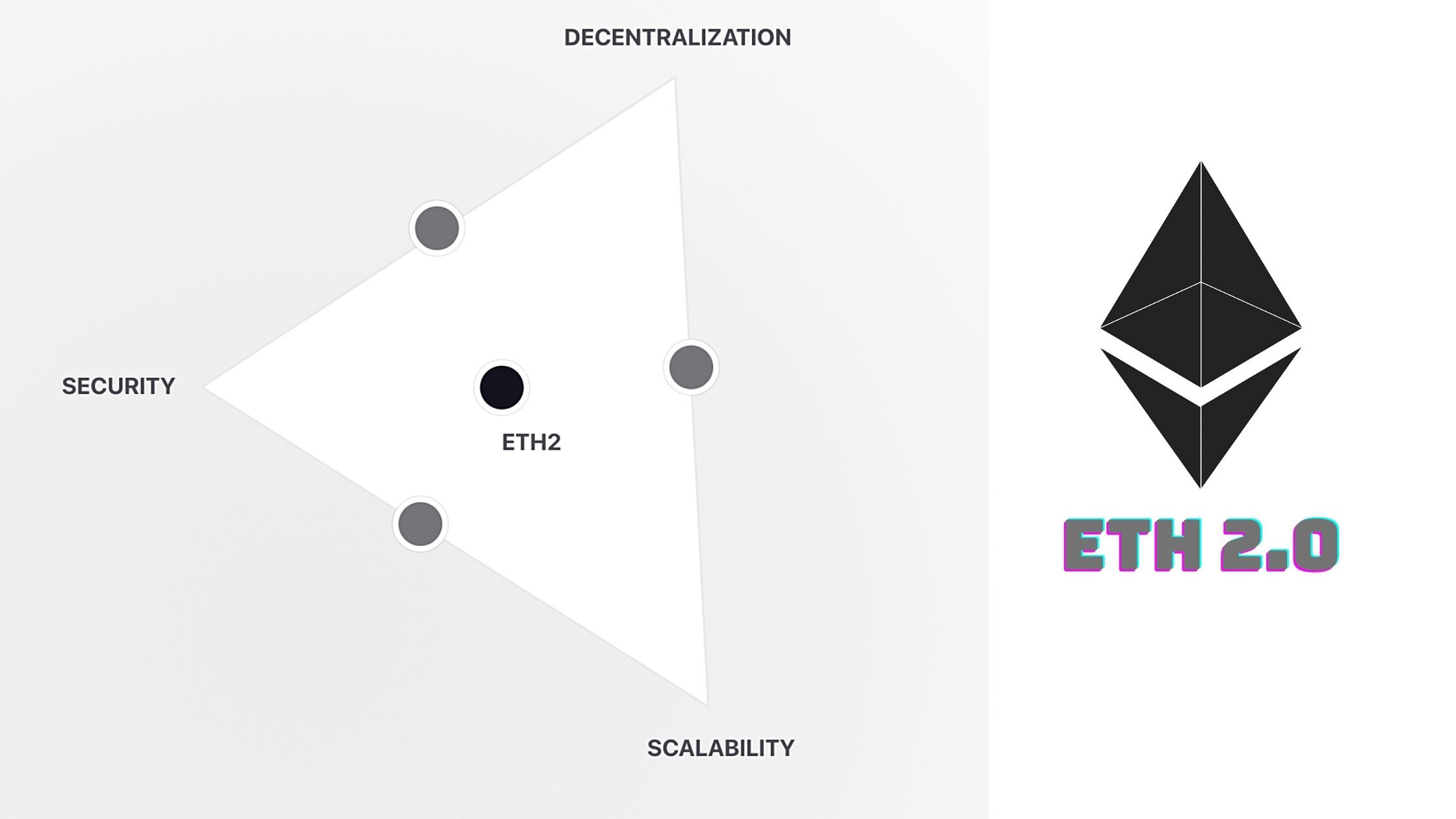 The biggest challenge for ETH 2.0 is to overcome the Blockchain trilemma which states that it is difficult to attain, decentralization, scalability, and security all together for any single project. This very problem lies at the core of ETH 2.0 vision where they are working to attain scalability, security without sacrificing the very fabric of blockchain decentralization

Centralization Is Not The Way Out & Nor The Option:

Ethereum in its grander vision to solve the issue of scalability, high gas fee, and security, doesn’t want to compromise with its core decentralization fabric, so that is why they are upgrading themselves with a sense of accountability and maturity.

They want to take the Blockchain trilemma issue heads-on and preserve decentralization, which makes Ethereum blockchain

So for ETH 2.0 Going centralized just to attain the highest level of speed and scalability is not an option.

With this its time to discuss the challenge of Blockchain trilemma and how ETH 2.0 is preparing to solve it

ETH’s 1.0 Scaling Challenge : (Is Blockchain Trilemma) How Does Eth 2.0 Planning to combat this?

Let’s dig deeper into this blockchain trilemma and decode how Ethereum 1.0 is bugged with it and what it is doing to solve the same with the proposed Eth 2.0 version. 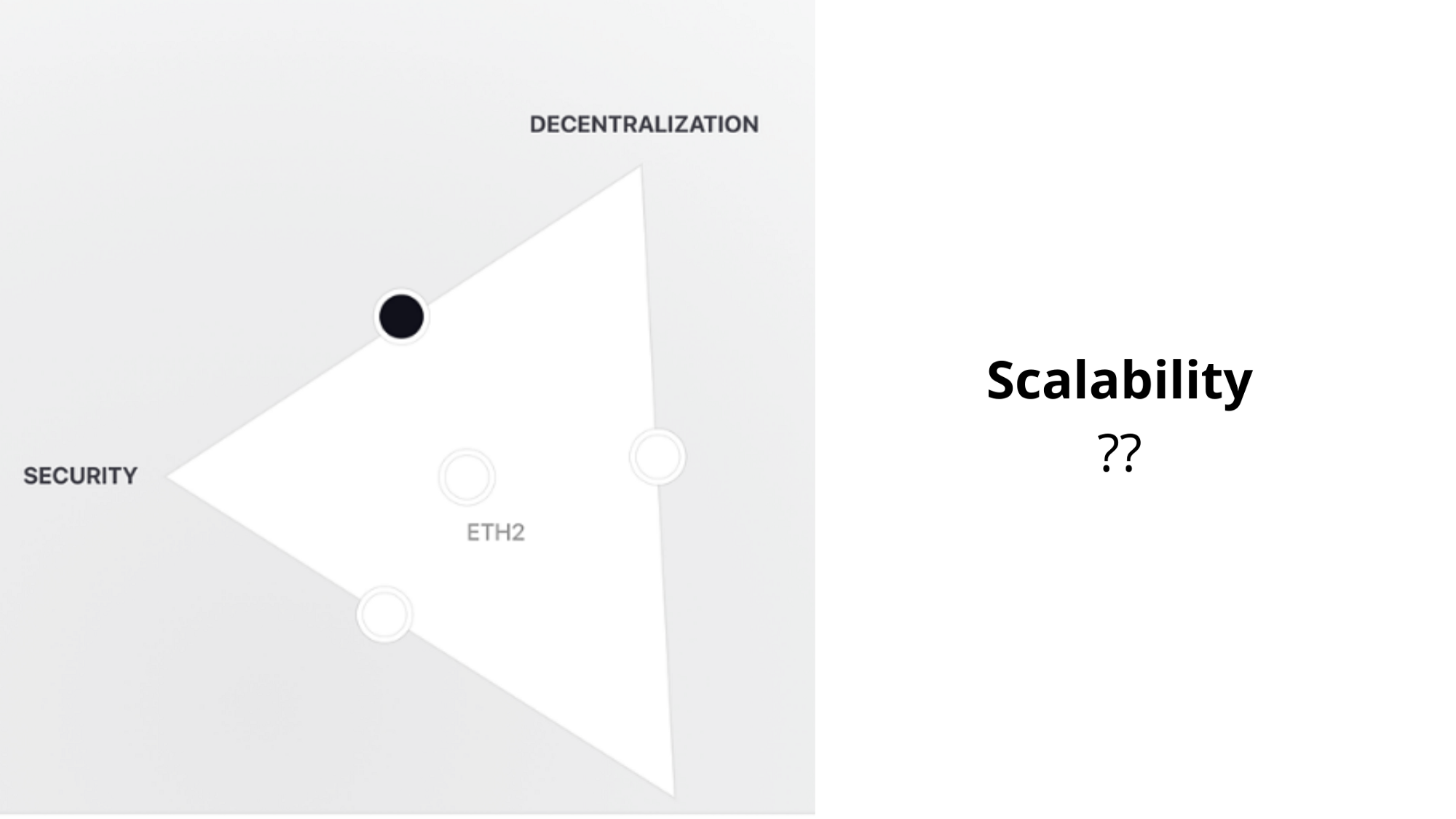 So how ETH 2.0 is solving this Transaction processing Limit?

In order to handle a higher No. of transactions per second, the current ETH 1.0 network will be required to have more no of nodes to process more transactions, which is being tackled by proposed Eth 2.0 where it is planning to deploy the Shard Chains that will spread the load of the network into 64 new chains.

2. Scalable and secure: But At The Cost of Decentralization : 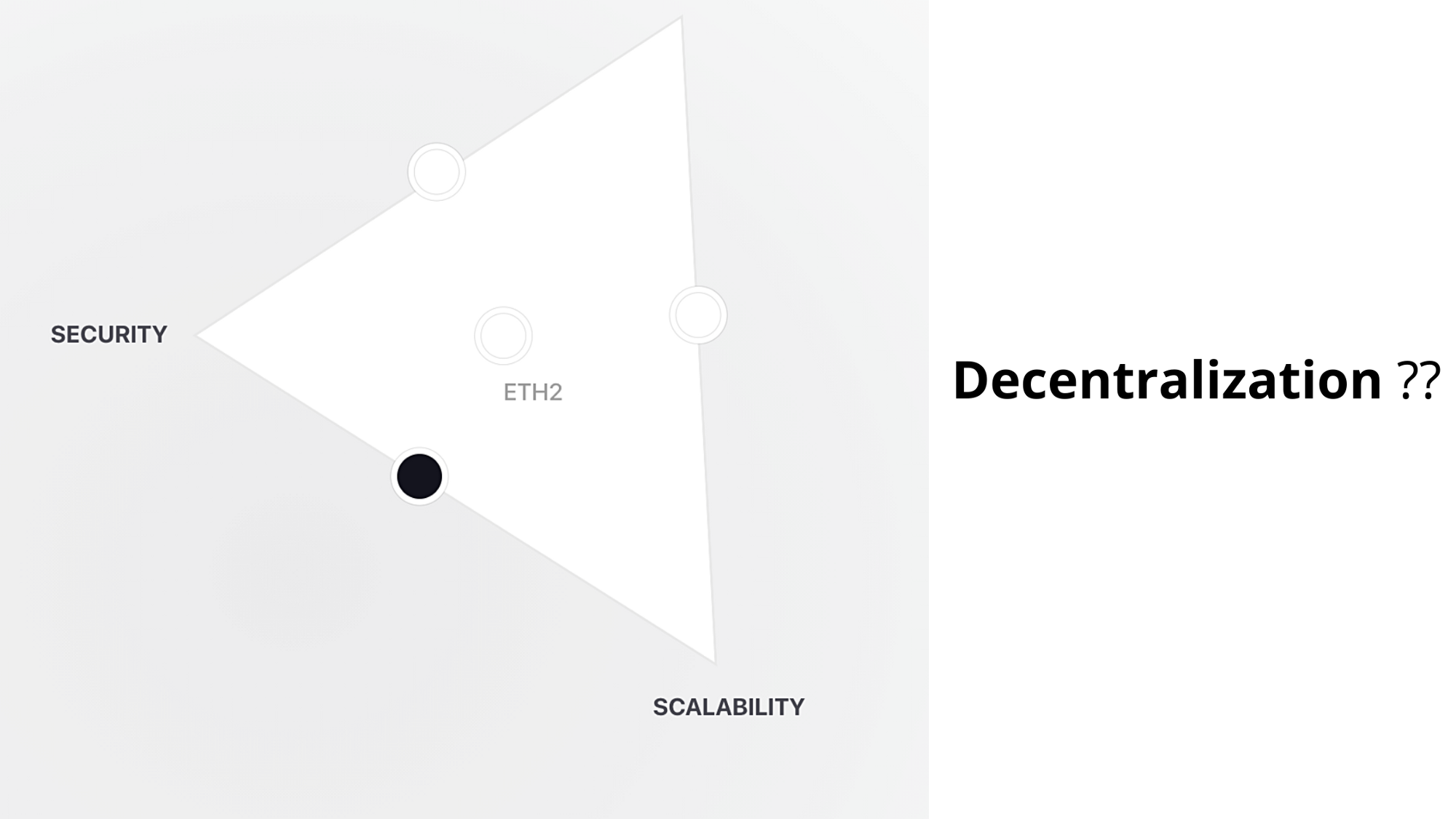 The second blockchain dilemma for current ETH 1.0 is that if it chooses to increase the network size by increasing more network nodes and tries to attain scalability and security, it will require more active participants to act as a validator. This in turn requires more people to purchase expensive mining equipment and plug it into the blockchain network to help it scale.

This can go against the concept of decentralization and not everyone will be able to afford such hardware, instead, a few powerful and privileged ones will start having a larger say as network validators.

Proposed Eth 2.0 Beacon Chain & Sharding Chain Upgrade, Have An Answer To This :

The beacon chain upgrade and the completion of the Merge phase will solve this issue in a big way. This upgrade with the use of Shard chains will migrate the ETH 1.0 from proof-of-work to a proof-of-stake consensus mechanism. It will help the Ethereum network to scale horizontally allowing more nodes to be created in the network.

These nodes will no longer require expensive hardware instead it will be easy for anyone with a laptop, smartphone, and decent internet, to act as a validator node and run a proof-of-consensus smart contract with ease. Eventually, it will encourage larger community participation and foster decentralization at large apart from making the network more secure

Decentralized and scalable: But At The Cost of Security 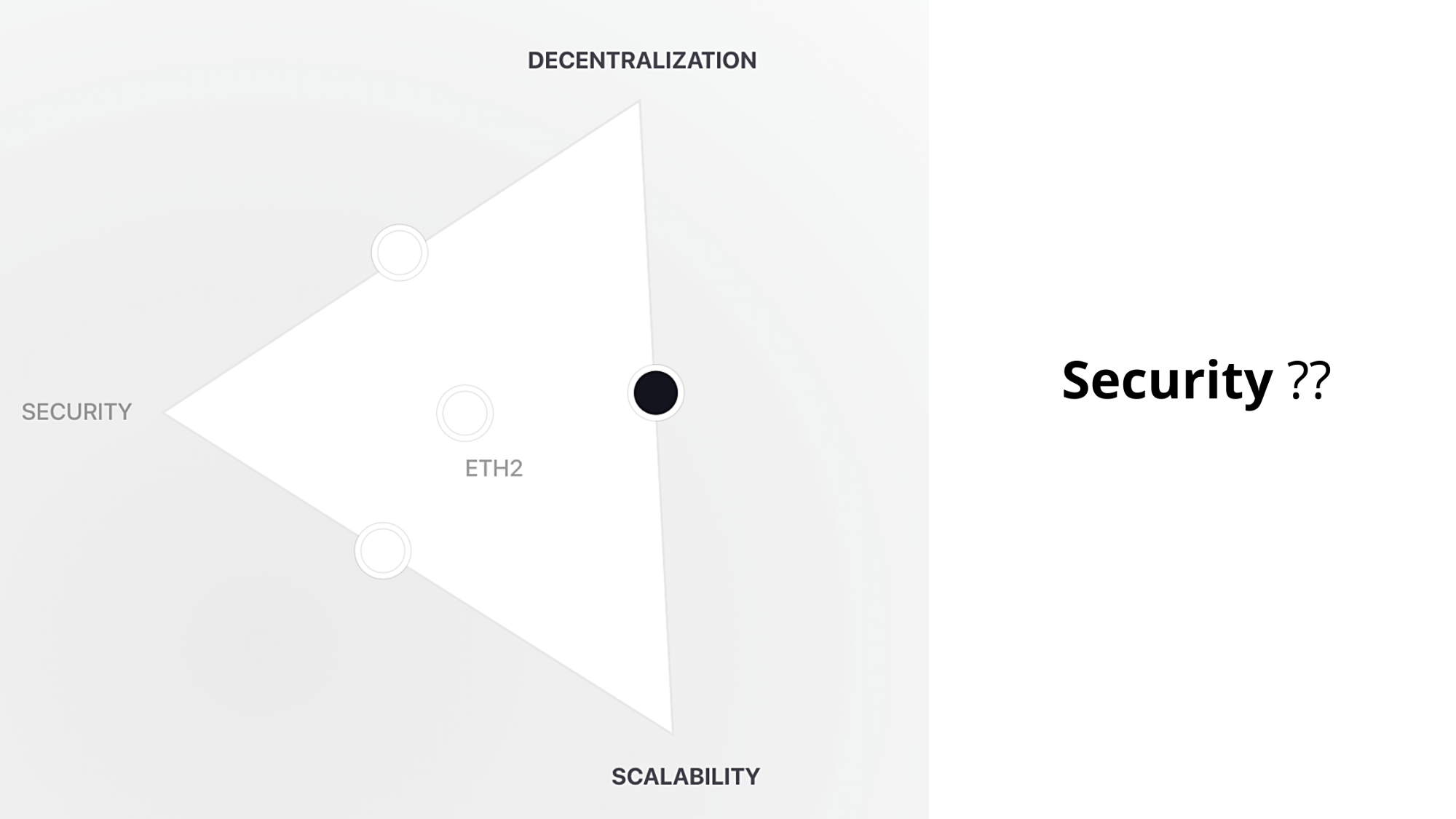 The third challenge which the blockchain trilemma poses for Eth 1.0 is that of sacrificing the security at the cost of decentralization and scalability. Currently, the information pertaining to every transaction that is successfully mined by the miners in the network is broadcasted to every network node so that the change in the network states due to the newly created block is known to everyone.

So if the current Ethereum network tries to attain scalability & decentralization by increasing the size of the network nodes(vertically ) to accommodate more transactions and is required to broadcast it to achieve decentralization the entire process becomes too slow to be efficient. There can be a delay in processing the transaction which may lead to a higher risk of attack while information is in flight. This makes the network more vulnerable to security threats.

“Decentralization and scalability may lead to security compromises ”

Eth 2.0 proposed upgrade has an answer to this blockchain trilemma. 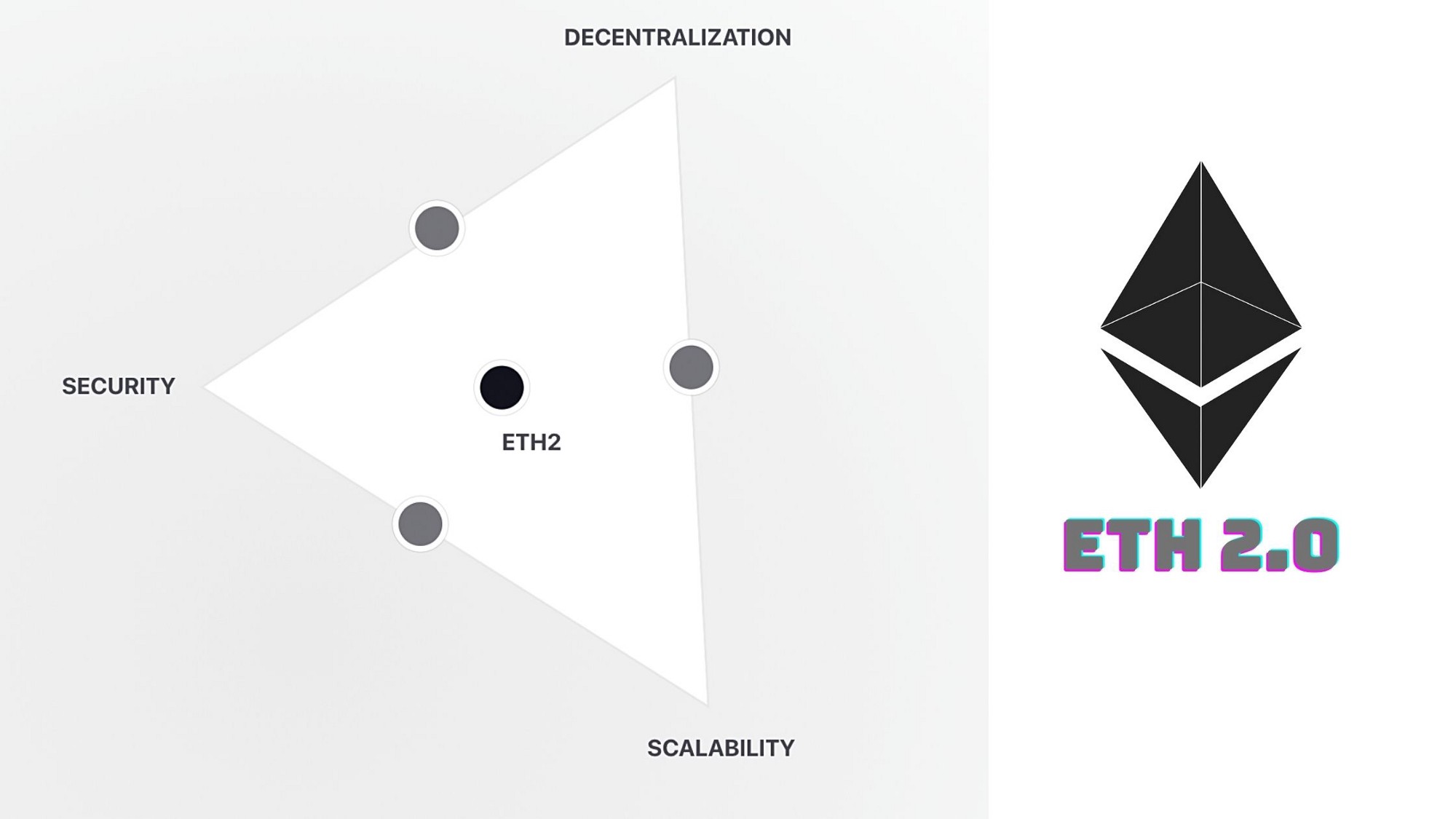 The proposed beacon chain merger to Ethereum current main chain that will make eth 2.0 network run on a proof-of-stake consensus and deployment of shard chains to scale it will help Ethereum network achieve:

All together without sacrificing anyone at the cost of other

Ethreum 2.0 Upgrade has all the answers for Ethereum’s blockchain trilemma

Will make Ethereum more scalable by increasing transactions per second while decreasing the power needed to run a node and validate the chain.

Will facilitate Ethereum security by coordinating validators across shards. And staking will lower the barrier to participation, creating a larger — more decentralized — network.

Will make the network more decentralized and secure, by lowering the entry barrier for common people, due to cheap hardware requirements.

Food For Thought Before Closing :

“The reason blockchain projects like Bitcoin & Ethereum found a very strong acceptance from the developer community and among the masses was due to its true decentralized nature. The decentralization of power and the ease of transacting without the intervention of any third intermediary revolutionalized the cryptocurrency world.

So if this phenomenon of the century has to succeed and thrive any further it will have to ensure that it is scaling, it is becoming more reliable, and also maintaining its decentralization ethos without failing ”

“Eth 2.0 will succeed or fail? Well be optimistic and let the time give the answer!