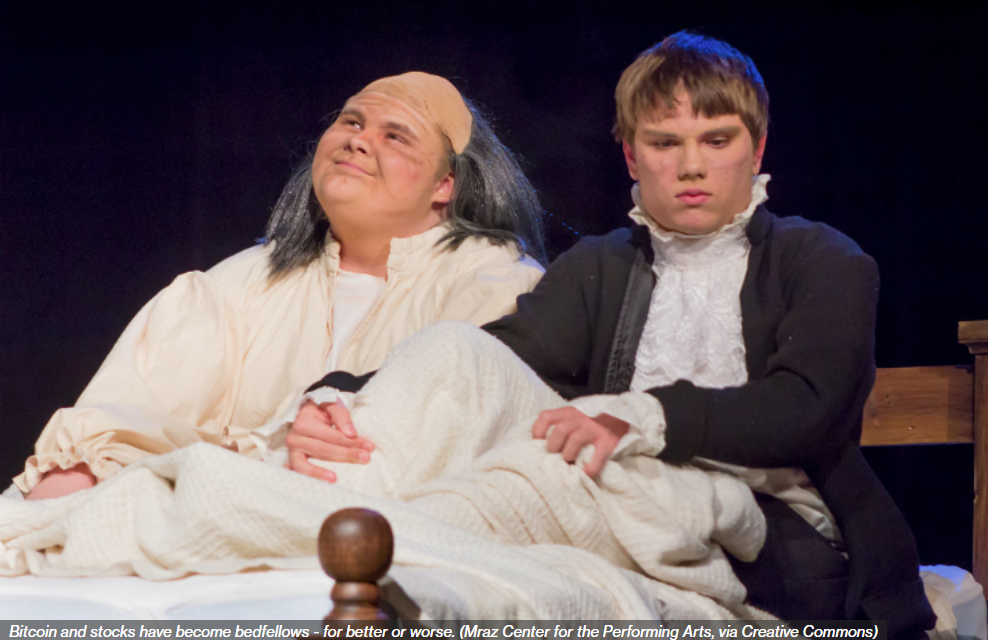 A key narrative in the crypto world in 2021 was the arrival of institutional investors to the space. Tesla (TSLA) bought $1.5 billion worth of bitcoin (BTC) and Wall Street banks like JPMorgan Chase (JPM) and Morgan Stanley (MS), as well as hedge funds, started allocating client assets to bitcoin that year.

Not only were these institutional investors a sign of growing mainstream acceptance, they also appeared to drive up prices. Crypto boomed with the sector’s market capitalization growing 185% that year.

Now, as the crypto market's latest swoon wipes off $1.25 trillion from the industry's all-time high market capitalization reached late last year, the question has risen: What role is institutional money playing in the crash? Or to put it more bluntly, are institutional investors making things worse?

One thing we know: The crypto market is increasingly correlated to the stock market, and institutional investors appear to have heightened that correlation. And when the stock market goes down, it takes crypto with it.

“The influx of institutional interest in BTC, which started to pick up in early 2020 with public declarations of interest from stalwarts of traditional investing, such as Paul Tudor Jones and Renaissance Technologies, coincides with a sustained jump in the 60-day correlation between BTC and the S&P 500,” according to an April 2022 report by Genesis Trading. (Genesis is a subsidiary of Digital Currency Group, which also owns CoinDesk.)

The three-month correlation between bitcoin and ether (ETH) and the major U.S. stock indexes reached a record high last week, according to Dow Jones Market Data.

For bitcoin bulls, the nettlesome takeaway is that the recent crypto crash can't be delinked from the downturn in traditional markets.

Stocks are now in a bear market after the Federal Reserve’s latest rate hike of 50 basis points, or 0.5 percentage point, at its latest Federal Open Market Committee (FOMC) meeting in May.

Both crypto and traditional markets briefly skyrocketed after Fed Chair Jerome Powell ruled out a larger increase than that at upcoming meetings, but they quickly reversed course after what Paul Hickey, co-founder of Bespoke Market Intelligence, called a “reality check.”

The S&P 500 and the Nasdaq both dropped nearly 5% the day after the meeting on May 4. Bitcoin fell over 10%, now down over 35% year to date. For market watchers, the upshot was how closely they're traveling in tandem.

A recent report from Morgan Stanley found that institutional investors dominated trades in crypto in 2021, and that retail investors accounted for only a third of all trades on crypto exchange Coinbase, reported the Financial Times.

“Client interest [is] concentrated more heavily onto the two main crypto assets, BTC and ETH,” analysts at data provider VandaTrack wrote, according to the newspaper. ETH stands for ether, the native cryptocurrency of the Ethereum blockchain. ”This matters because, as more institutions await the first results of the White House executive order on crypto regulation and the ETH merge to ETH 2.0, current price behavior will continue to be driven by TradFi assets.” (ETH 2.0 is shorthand for a planned upgrade of the Ethereum network, and "TradFi" is crypto-industry jargon for "traditional finance." The old world, as it were.)

“We think the increased involvement of institutions, which are sensitive to availability of capital and therefore interest rates, has contributed in part to the high correlation between bitcoin and equities,” the report stated.

So does that mean that those institutional investors who helped crypto to flourish a year ago are now a factor in the crash?

“We could make such an assumption, since the market has matured and a larger portion of participants are institutions, exposed to both crypto and traditional assets,” said Joe DiPasquale, CEO of BitBull Capital. “With time, it is plausible that we see faster tops and bottoms in the crypto space compared to the prolonged periods in the past.”

“This is the nature of tradable assets,” he said. “When assets are sold, all assets are sold. Bitcoin has correlated with the Nasdaq for quite a while now. This is no exception.”

It isn't easy to separate institutional and retail inflows and outflows. But sometimes you hear from the investors themselves. Miller Value Partners Chairman Bill Miller, known for beating the S&P 500 Index for 15 consecutive years, sold some of his bitcoin to meet margin calls, noting that when things get tough you want to sell very liquid assets – in this case bitcoin.

But recently, the premium flipped negative and fell to a 12-month low, according to data from CryptoQuant.

“Usually, there is a Coinbase premium. This means that the bitcoin price on Coinbase is higher than on Binance. This was/is very important, because American institutions and HNW (High Net Worth) were trading mostly on Coinbase. However... in the latest few days it’s negative. This indicates heavy selling on Coinbase Pro!” CryptoQuant said in a blog post.

“The crypto investor from retail to institutional tend to also be the investor in tech stocks,” said Howard Greenberg, cryptocurrency educator at Prosper Trading Academy. "They tend to be those bullish on technology as a disrupter to current industries, and this crossover and correlation is playing out currently."

The connection apparently holds fast when the market goes into reverse, he said.

“For Institutions it is also easier to liquidate their crypto positions especially with the 24/7 access to their capital than some other positions, so they tend to be the first positions closed out,” he said.

“In the past year-and-a-half, we’ve had new entrants to the digital assets market from the macro hedge fund world,” Jeff Dorman, chief investment officer at Arca wrote in a report. “It’s the players, not the assets, that are correlated.”