摘要： There has been a long and ongoing discussion regarding which programming language is preferable : Python or R. Despite their popularity, they are very different. One may be preferable in some scenarios than the other.

A little background on R

R is a programming language and analysis tool that was first introduced in 1993. Ross Ihaka and Robert Gentleman developed it. It is free, open-source software with an extensive library of statistical and graphical techniques.

It is one of the most widely used among analysts, statisticians, and researchers for retrieving, cleaning, analyzing, visualizing, and presenting data — various sectors such as IT, Banking, Healthcare, Finance use R .

◆A data scientist can use R programming to collect, perform statistical analysis, and create visualizations.
◆It is used for the graphical representation.
◆R is used both for machine and deep learning.
◆It also assists the financial sector by offering a sophisticated statistical tool for all financial operations and computations. Moving averages, stock market modeling, and financial KDD are made more accessible by R and its libraries.
◆It also implements statistical methods such as linear and non-linear modeling.

Statistical Computing:Among statisticians, R is the most widely used programming language. It assists them in manipulating, collecting, cleaning, and analyzing. It also includes charting features and generate intriguing visuals from any record.

A little background on Python

It is a well-known computer language. It is a widely used, interpreted, and object-oriented programming. Guido van Rossum invented, and it was first published on February 20, 1991. Apart from web development, it can be used for different types of programming and software development. It interacts effectively with other software components, making it a universal language that can be used to create a comprehensive end-to-end process.

◆It can be used to manage BDA as well as to conduct complicated mathematical calculations.
◆It can connect to database systems and also read and edit files.
◆Used for software development, business applications, audio, video apps, back-end web and mobile application development, etc.
◆It enables analysts to generate Excel reports in less time.

Analysis:Python is handy for analytics. For example, if a database contains millions of rows and columns, its size makes it difficult and time consuming to extract information. This is where libraries like Pandas, NumPy, and SciPy come in, which can get the job done quickly.

Extraction:Since data is not always available, we need to extract from the web. In this case, libraries Scrapy and Beautiful Soup can be used to extract information from the Internet.

Machine Learning:It also has a ML library. Scikit-Learn and PyBrain, which are one of the libraries, offer several fast machine learning and statistical modeling tools such as classification, regression, and clustering through a interface.

◆Effective and Simple to use:The syntax, or the words and symbols required for a computer program to work, is intuitive and straightforward. They are practically English terms, so it is legible. Compared to other technologies ​​such as C, Java, and C #, the code implementation time is reduced, so developers and software engineers can spend more time working.

◆Libraries:They are a set of pre-combined codes that can be used repeatedly to minimize coding time. It eliminates the need for you to write code from scratch.

◆Flexibility:Compared to other languages ​​such as Java, it offers the flexibility to tackle problems that would otherwise be impossible to solve. It has proven to be scalable.

Now that we’ve explored both of the programming from every angle, the question of “Which language is better for Data Science?” arises.

What do you want to learn — Python or R?

The significant difference between these two is how they tackle situation. Both open-source languages are backed by substantial communities that are constantly expanding their libraries and tools. 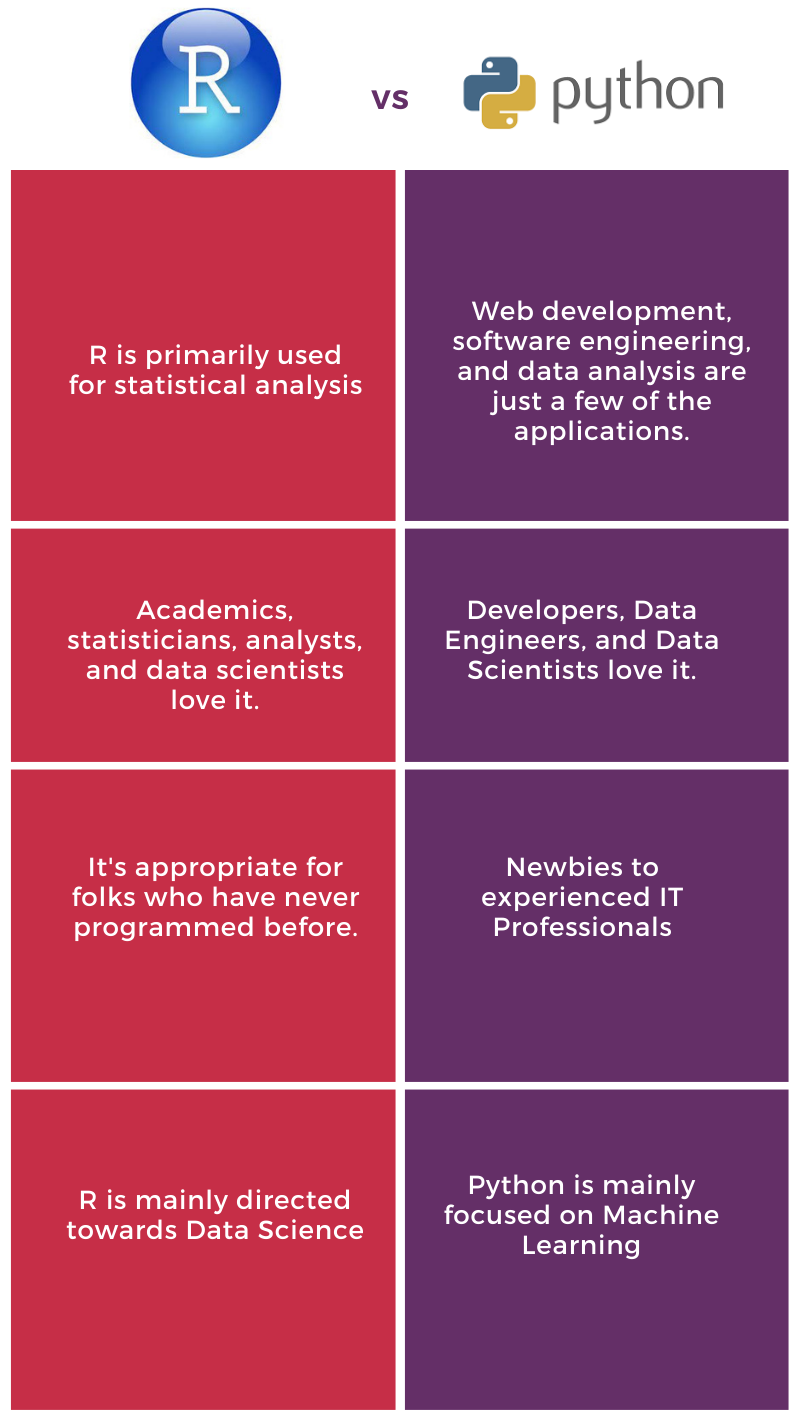 However, one question you should ask yourself is, “What do you want to focus more on?” Machine learning or Statistical learning?

ML is an AI discipline, whereas statistical learning is a statistics subfield. R is ideally suited for statistical purpose since it is a statistical language. Anyone with a formal statistical background can adopt R programming since they can easily understand it. Python, on the other hand, is the most suitable for ML. Large-scale applications are the focus of machine learning. Python appears to be the ideal choice due to its flexibility and scalability for production use, particularly when analysis has to be linked with web applications.

Python or R are popular search phrases all throughout the world, as shown in the image below. If we look at trends, Python has become more popular than R in the last decade.

According to PayScale.com, the average Python developer salary in the US is $79,395 per year, and the average salary for an R Programmer is $68,554(at the time of the publication).

Python is a robust and adaptable programming language that may be used for a wide range of computer science applications. On the other hand, R is a popular for built for analytics. In reality, both of these are incredibly advantageous and significant in the field of data science. However, if you want to study one language, your decision will be influenced by the job you want to pursue.

Following are some questions you should ask yourself before you choose either of the two:

◆Are you interested in Machine and AI or Statistical Learning and Analytics?
◆What are the most popular tools in your field?
◆Do you want to be a analyst with a deeper understanding of data visualization, or do you want to integrate web applications with it?
◆How much time do you have to devote to mastering a programming?

Finally, learning both of these languages is never a bad idea because it will only benefit you as a computer science engineer.