摘要： Exploring some interesting visualization with its code, advantages and limitations. 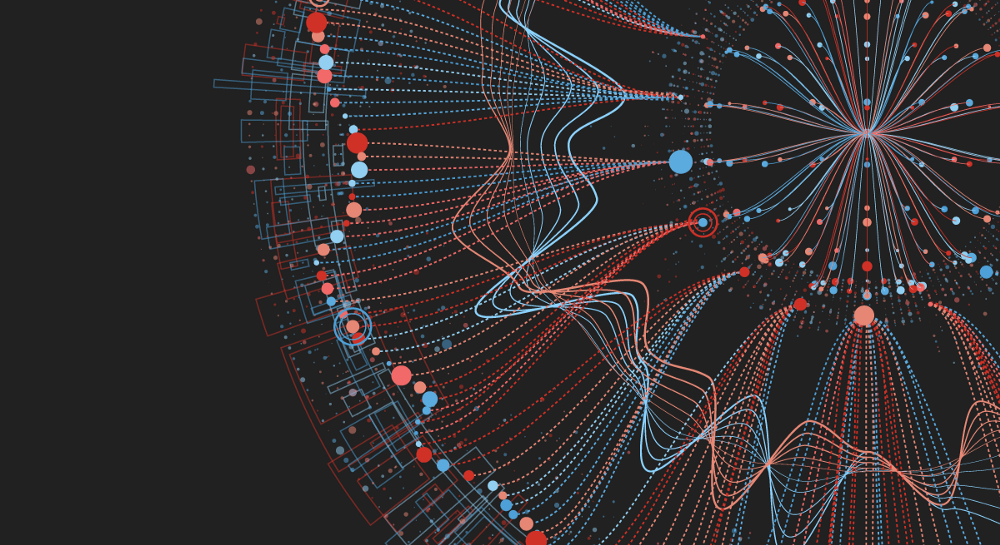 Not everyone is a data scientist!

People often get bored seeing numbers while pictures are always exciting to look at.

Gaining insights is not easy just by looking at the data, also as said not everyone is a data scientist who can throw queries and find answers. Visualization can help you find answers that are not obvious from viewing the raw data.

Visualization can be defined as representing data in a more understandable way using graphs and charts. Any graphical presentation that conveys some useful information or insight can be thought of as Visualization. Visualization has evolved from cave drawings and thematic cartography of 17th century to modern interactive 3-D plots.

In this data-driven world where information persists everywhere from a car sensor to remote satellites, representation of information in proper form is a crucial task. Visualization serves this need!

Visualization gives you answers to questions you didn’t know you had.” — Ben Schneiderman

Visualization can range from a simple sketch on a paper to some complex graphs generated using visualization libraries. Visualization is an effective medium to convey messages until they are correctly represented. Bad visualizations can communicate a whole different meaning and may have negative consequences.

Here are some interesting visualization along with the insights drawn from them:

Nightingale rose chart was first created by Florence Nightingale in 1858 representing “Diagram of the causes of mortality in the army of the East”. It is also known as Coxcomb Chart or Plot Area Diagram. It can be seen as an upgrade over Stacked Column Chart which contains stacked column along with the radars.

Use cases:
This chart is widely used when showing distribution over time. It is often used to represent wind speed and directions.

Limitations:
Nightingale chart proves to be less useful when large number of features are to be plotted. The stacked portion might become crowded and hard to interpret when many categories are added.

Sankey Diagram shows flow from one quantity to other quantities along with their proportion. During each stage of a process, arrows can combine or split the path. The width of the arrow shows its value, hence wider the arrow larger the proportion.

Use cases:
It can be used in finance, management and energy analysis or to represent a life cycle of a product. This type of visualization can be used to describe the flow of an entity from source to end. For example, if we want to know how much a product is produced, reused, wasted over a period of time.

Limitations:
Sankey diagrams are limited to flows and life cycles. It has limited representation like nodes, connections and the values. More complex relationships cannot be derived from it.

Insights:
The above diagram shows the sources of electricity generation in 2018. It is seen that the contribution of coal was the highest followed by gas and reducing down to oil which contributed the least.

Sunburst is an alternate of Treemap to represent hierarchical data but in a circular form. As the name suggests bursting of the sun 😊 the hierarchy moves from the inner circle to outer. Each category of the circle is sliced as a node and the center of the circle is the root node. It’s better to represent a particular hierarchy with different shades of a color to maintain uniformity.

Use cases:
Sunburst can show hierarchical flow as well as part of a whole relationship

Limitations:
If the color scheme is improper then understanding the chart becomes difficult. Further, too much slicing makes chart crowded and hard to read.

Use cases:
A bubble chart is generally used to represent the relationship between three or four features.

Limitations:
If you have large data than bubble chart would look more like a mess as bubbles would overlap and it becomes difficult to interpret. Also, if the variable representing the bubble size is zero or negative than this chart does not prove useful.

Funnel chart represents each stage of a process. It shows the decrease in values at each stage. Here starting phase is largest and then the size of the bar keeps on decreasing at each stage, hence taking shape of a funnel. The reduction in value can easily be compared with the above values.

Use cases:
It can be used in finance or business sector. E.g. Process of sales flow in a company or activities of a customer visiting an e-commerce website. It shows a complete summary of each stage of a process and can be used to make important decisions. Also, funnel charts are intuitive and easy to understand.

Limitations:
Funnel are simple structures and are inefficient in representing complex relationships among features.

Insights:
Initially, Vancouver and Ottawa both received 200 and 300 applications respectively. The candidates got refined as the process continued. Only 50 and 57 candidates were selected for the final round of interviews at the respective offices and from them, 15 candidates received offer for Vancouver office and 5 candidates got in the Ottawa office.

Ridgeline Plot, which was formerly known as joyplot is a useful visualization which helps us to understand the distribution of data. Distribution of various features can be examined at the same time using this plot. Here the features can also be grouped on a particular column.

Use cases:
Ridgeline plots are very intuitive and are used widely for pre-processing tasks. It works well for comparing a small number of features.

Limitations:
It might not be useful for comparing a large number of features as it may mess up the graph. Also overlapping of the curve might be difficult to view. 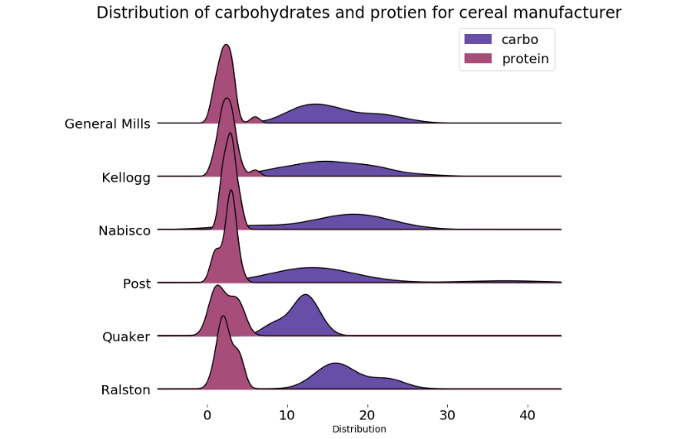 Insights:
From the above plot, we can see the distribution of values for the carbohydrate and protein content for different cereal manufacturers. It is seen that the values of protein are normally distributed.

Use Cases:
It is best to represent hierarchical data. It is used when we want to compare the proportion of different categories.

Limitations:
It is not useful if there is a high hierarchy as the tree map becomes clustered and it is difficult to understand. Also, the rectangles are aligned automatically and you don’t have control over it. It can not be used to represent negative values.

Waffle charts are used to show the contributions of the features. The proportion of a feature is represented using square blocks which overall forms a waffle-like structure. It is used to compare the proportion of different categories

Use Cases:
It represents proportions in a well-defined color grid format which is easy to view and understand. They are used to understand how much a category or feature contributes to the whole.

Limitations:
It cannot give any more information except the proportion of different categories

Bullet chart is used if you want to compare a value with a target value and want to know whether the obtained value is good or bad. It can be used as an alternative to gauge and meter chart.

Use Cases:
It is used in Business, Finance or Management sector. For e.x. If you want to know whether the total sales surpassed the targeted value.

Limitations:
Sometimes it takes time to understand and plot the chart with coding. Also, only one value can be compared at a time.

Insights:
The first bullet chart shows that a movie got a 3-star rating compared to 3.5. From the second chart, it is seen that the movie collected 50 million more money than the threshold value. Hence movie did great in terms of earning and but not with critic reviews.

Use Cases:
It can be used in any field where you want to show the distribution of data along with the statistical insights.

Limitations:
It might seem congested for a large number of features as the statistical information along with the distribution curve needs to be shown. 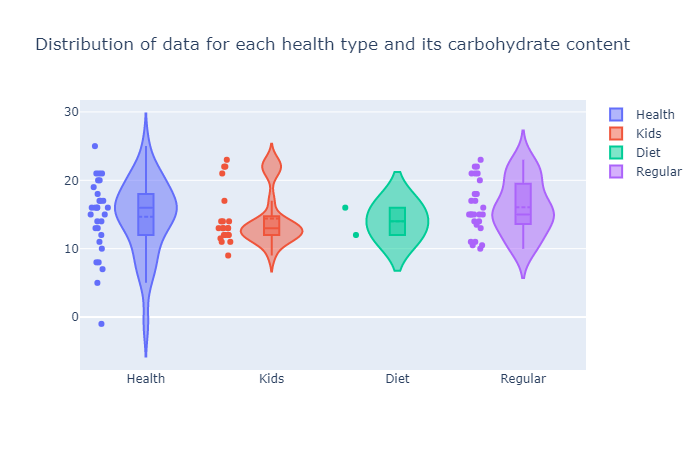 Insights:
It can be seen that health, diet and regular type has a normal distribution and kids type has an uneven distribution of data. Also, there is a negative value in health type which is an outlier as carbohydrate value can not be negative.

If you want to visualize how a value is reached by doing a number of addition and subtraction operation on an initial value then the waterfall chart fits perfectly. In Waterfall chart colors are used to show different operation e.g. green shows addition, red shows subtraction and blue shows total value received after all the operations. Here all the values between starting and final value are floating, thus the name waterfall chart.

Use Cases:
This chart is commonly used in the business and finance sector. For e.g. how revenue flowed over the months or how stock prices changed over a period of time.

Limitations:
Only the flow of process can be represented using this chart. 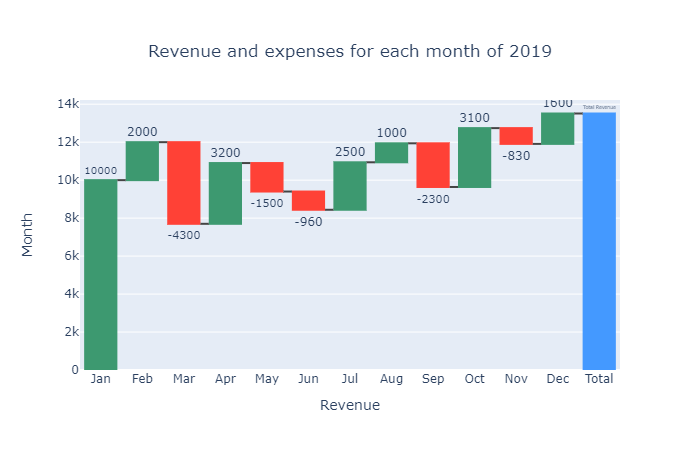 Insights:
It is seen that the highest revenue was gained in January (10K), while the maximum expenses were seen in March. The total revenue earned at the end of the year was 13.51K.